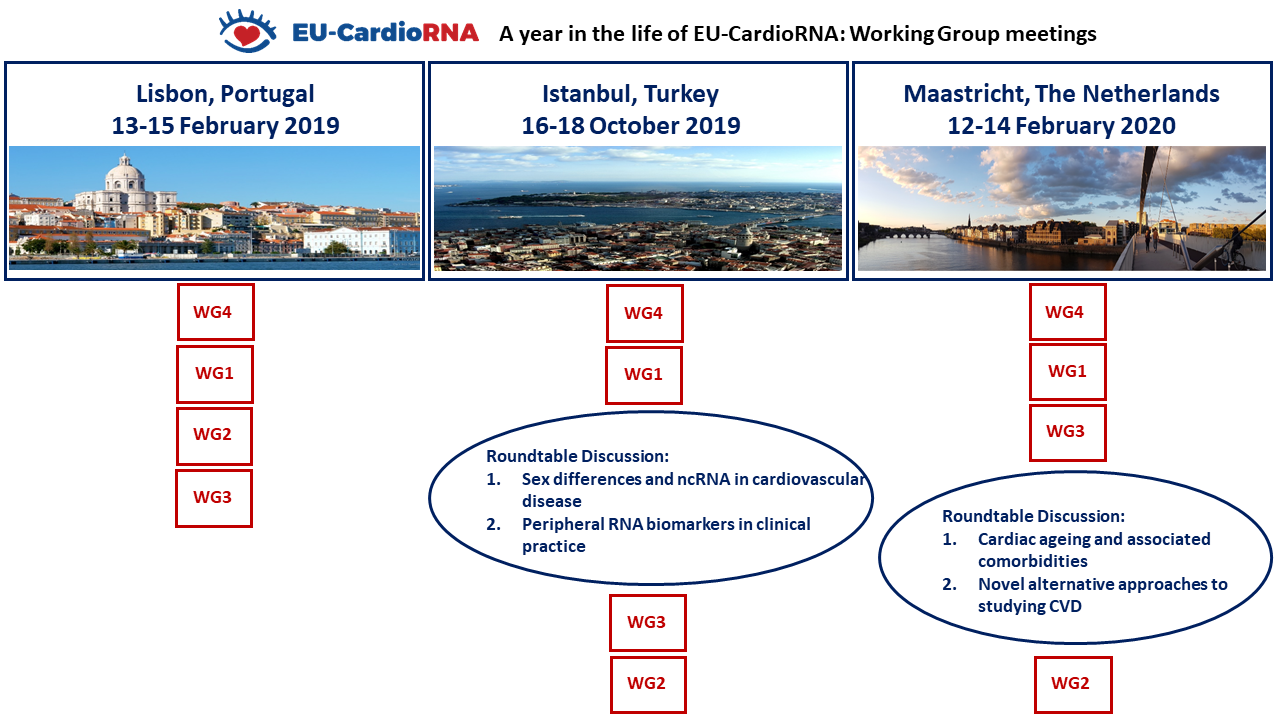 A Year in the Life of the EU-CardioRNA COST Action: CA17129 Catalysing Transcriptomics Research in Cardiovascular Disease

The role of circular RNAs (circRNAs) as biomarkers remains poorly characterized. Here, we investigated the performance of the circRNA hsa_circ_0001445 as a biomarker of coronary artery disease (CAD) in a real‐world clinical practice setting. 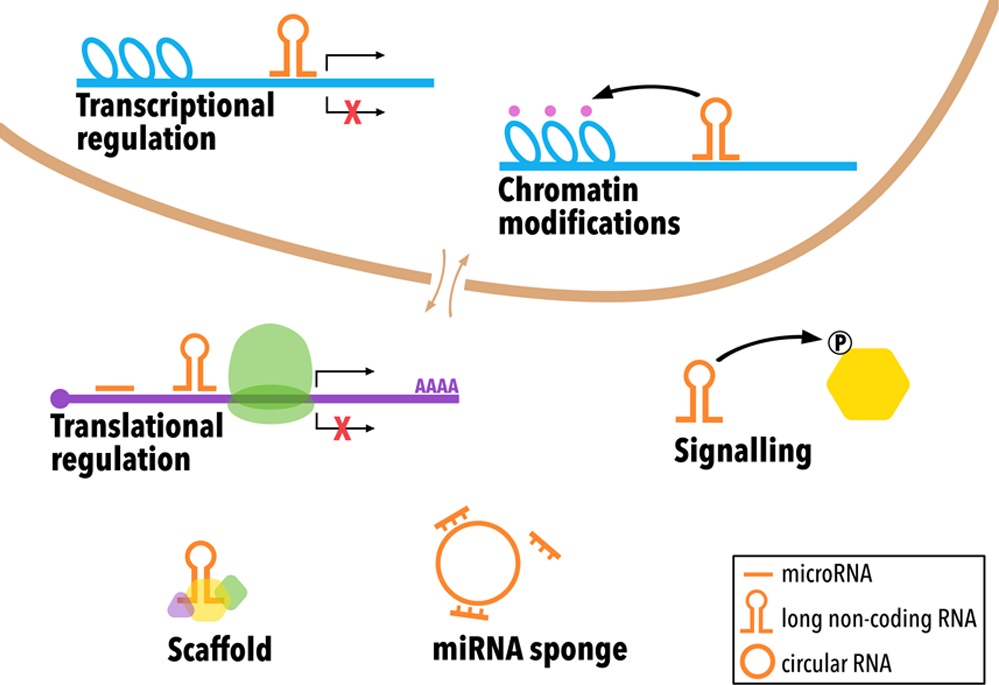 Cardiovascular disease is an enormous socioeconomic burden worldwide and remains a leading cause of mortality and disability despite significant efforts to improve treatments and personalize healthcare. Heart failure is the main manifestation of cardiovascular disease and has reached epidemic proportions. Heart failure follows a loss of cardiac homeostasis, which relies on a tight regulation of gene expression. This regulation is under the control of multiple types of RNA molecules, some encoding proteins (the so-called messenger RNAs) and others lacking protein-coding potential, named noncoding RNAs. In this review article, we aim to revisit the notion of regulatory RNA, which has been thus far mainly confined to noncoding RNA. Regulatory RNA, which we propose to abbreviate as regRNA, can include both protein-coding RNAs and noncoding RNAs, as long as they contribute, directly or indirectly, to the regulation of gene expression. We will address the regulation and functional role of messenger RNAs, microRNAs, long noncoding RNAs, and circular RNAs (ie, regRNAs) in heart failure. We will debate the utility of regRNAs to diagnose, prognosticate, and treat heart failure, and we will provide directions for future work. 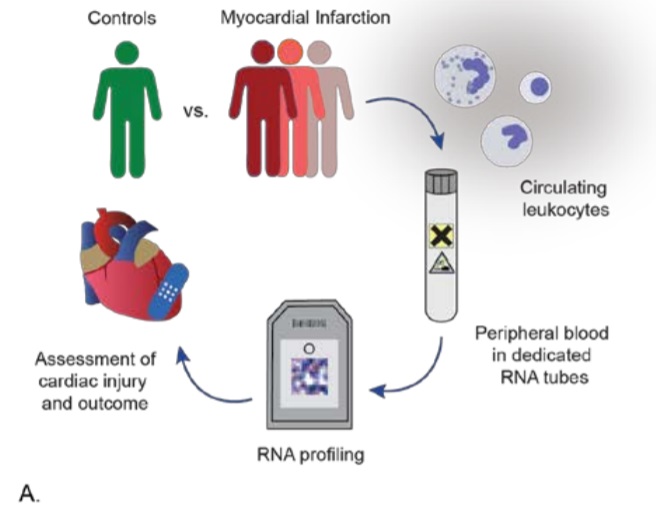 Background – The identification of patients with acute myocardial infarction (MI) at risk of subsequent left ventricular (LV) dysfunction remains challenging, but it is important to optimize therapies. The aim of this study was to determine the unbiased RNA profile in peripheral blood of patients with acute MI and to identify and validate new prognostic markers of LV dysfunction. Methods – We prospectively enrolled a discovery cohort with acute MI (n=143) and performed whole blood RNA profiling at different time points. We then selected transcripts on admission that related to LV dysfunction at follow-up and validated them by quantitative polymerase chain reaction (qPCR) in the discovery cohort, in an external validation cohort (n=449) and in a representative porcine MI model with cardiac magnetic resonance-based measurements of infarct size and postmortem myocardial pathology (n=33). Results – RNA profiling in the discovery cohort showed upregulation of genes involved in chemotaxis, interleukin-6 and NF-κB signaling in the acute phase of MI. Expression levels of the majority of these transcripts paralleled the rise in cardiac troponin T and decayed at 30 days. RNA levels of QSOX1, PLBD1 and S100A8 on admission with MI correlated with LV dysfunction at follow-up. Using qPCR, we confirmed that QSOX1 and PLBD1 predicted LV dysfunction (OR 2.6 [95% CI 1.1-6.1] and 3.2 [1.4-7.4]) whereas S100A8 did not. In the external validation cohort, we confirmed QSOX1 and PLBD1 as new independent markers of LV dysfunction (OR 1.41 [1.06-1.88] and 1.43 [1.08-1.89]). QSOX1 had an incremental predictive value in a model consisting of clinical variables and cardiac biomarkers (including NT-ProBNP). In the porcine MI model, whole blood levels of QSOX1 and PLBD1 related to neutrophil infiltration in the ischemic myocardium in an infarct size-independent manner. Conclusions – Peripheral blood QSOX1 and PLBD1 in acute MI are new independent markers of LV dysfunction post-MI. 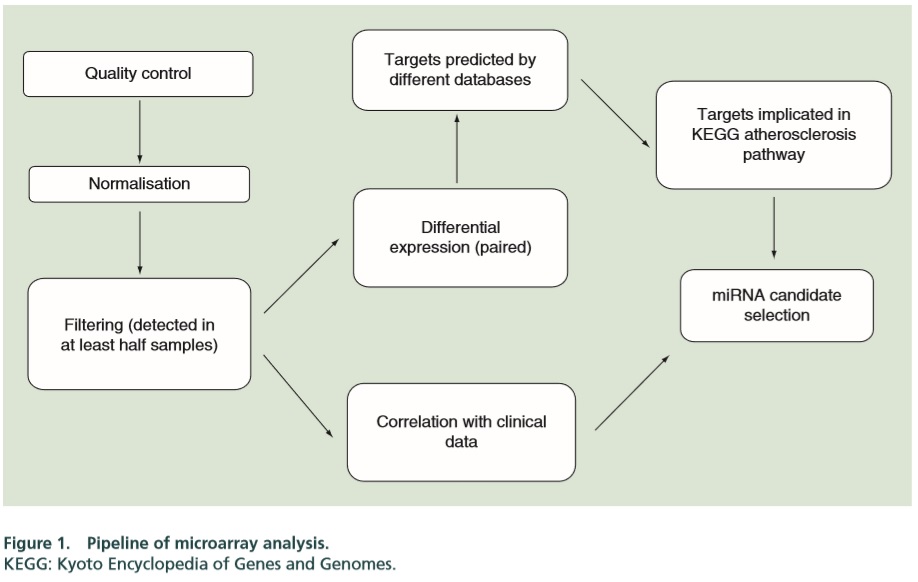 Aim: Identification of microRNAs (miRNAs) associated with atherosclerosis may unravel novel therapeutic targets and biomarkers. We studied miRNAs differentially expressed between coronary atherosclerotic plaques(CAP) and healthy arteries.
Materials & methods: Paired CAP and internal mammary arteries (IMA) were collected from 14 coronary artery disease patients. The miRNA profiles between diseased (CAP) and healthy (IMA) tissues were compared using microarrays and quantitative PCR.
Results: Thirty-one miRNAs were differentially expressed between CAP and IMA. Among these, miR-486-5p showed a high level of regulation(12-fold),had predicted interactions with atherosclerosis-associated genes and correlated with triglyceride levels and arterial stenosis. Regulation of miR-486-5p was validated by PCR (p = 0.004).
Conclusion: The miRNAs are regulated in the atherosclerotic plaque. We highlight miR-486-5p whose role in atherosclerosis requires further investigation. 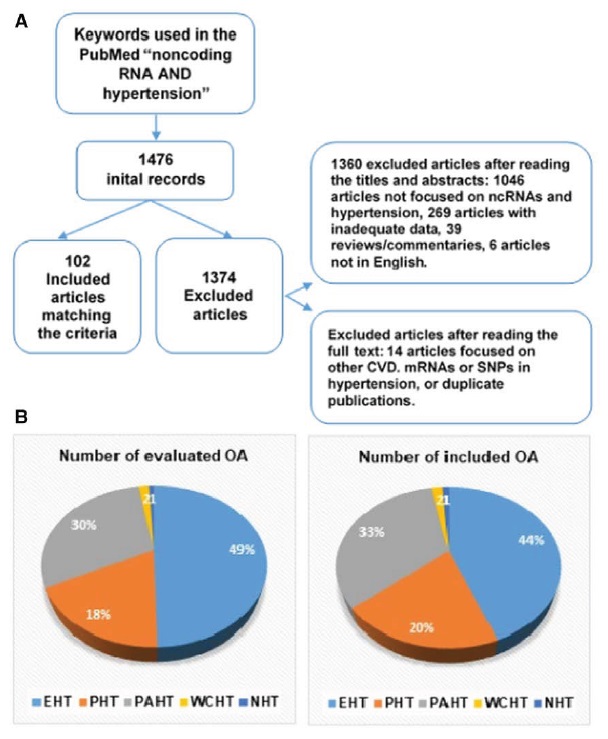 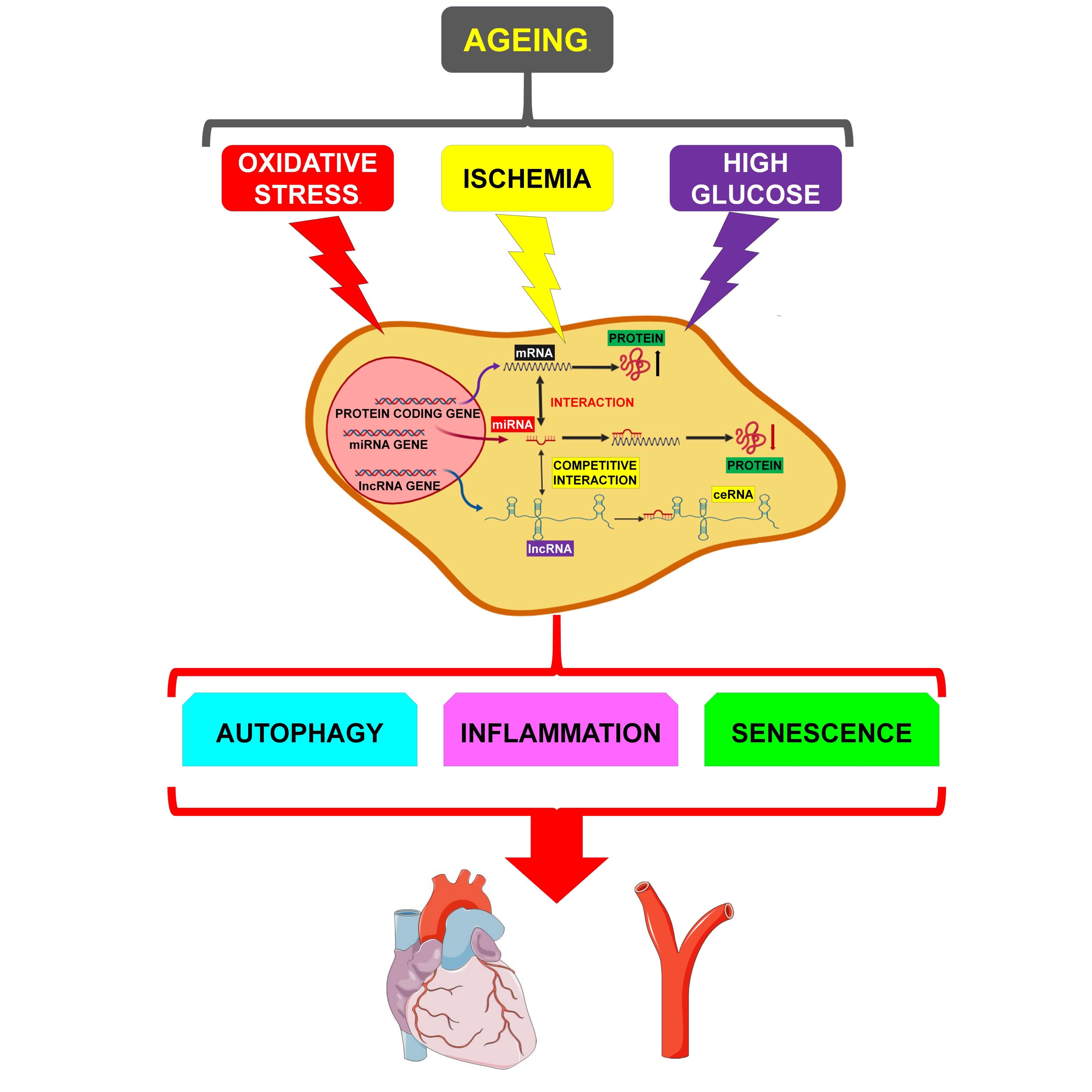 Abstract: Cardiovascular diseases (CVDs) are the most serious health problem in the world, displaying high rates of morbidity and mortality. One of the main risk factors for CVDs is age. Indeed, several mechanisms are at play during aging, determining the functional decline of the cardiovascular system. Aging cells and tissues are characterized by diminished autophagy, causing the accumulation of damaged proteins and mitochondria, as well as by increased levels of oxidative stress, apoptosis, senescence and inflammation. These processes can induce a rapid deterioration of cellular quality-control systems. However, the molecular mechanisms of age-associated CVDs are only partially known, hampering the development of novel therapeutic strategies. Evidence has emerged indicating that noncoding RNAs (ncRNAs), such as long ncRNAs (lncRNAs) and microRNAs (miRNAs), are implicated in most patho-physiological mechanisms. Specifically, lncRNAs can bind miRNAs and act as competing endogenous-RNAs (ceRNAs), therefore modulating the levels of the mRNAs targeted by the sponged miRNA. These complex lncRNA/miRNA/mRNA networks, by regulating autophagy, apoptosis, necrosis, senescence and inflammation, play a crucial role in the development of age-dependent CVDs. In this review, the emerging knowledge on lncRNA/miRNA/mRNA networks will be summarized and the way in which they influence age-related CVDs development will be discussed.

Cardiovascular disease (CVD) remains the leading cause of death worldwide and, despite continuous advances, better diagnostic and prognostic tools, as well as therapy, are needed. The human transcriptome, which is the set of all RNA produced in a cell, is much more complex than previously thought and the lack of dialogue between researchers and industrials and consensus on guidelines to generate data make it harder to compare and reproduce results. This European Cooperation in Science and Technology (COST) Action aims to accelerate the understanding of transcriptomics in CVD and further the translation of experimental data into usable applications to improve personalized medicine in this field by creating an interdisciplinary network.

Are you sure you want to leave group?